The most efficient way to ensure wealth for your family is to build your career early on.  For most, focusing on your career in your 20s will have a substantial payoff.  While in your 20s, you likely don’t yet have children or other obligations like aging parents or a big mortgage to pay.  And the payoff is a solid foundation to put your earnings capability into overdrive.  Your 20s are also the time to take risks, as you’ve got a lifetime ahead of you to make up for any mistakes.  Working for the small, but potentially blockbuster company while accepting a lower salary in exchange for greater upside is easy now, but tougher later in life.  You can really push yourself to the limits without doing too much damage to yourself or your family.

Most of us understand intuitively that a great career can lead to substantial wealth, but what are some concrete steps we can take to ensure this outcome?

First, let’s discuss why the choice of career is so important to the ability to generate wealth.  A large net worth is the ultimate goal, as net worth, and not income, is the best measure of wealth.  If, like most of us, you do not start out with family money, then having a high income allows you to save and invest large amounts while still living a pretty amazing life.  As an extreme example, let’s look a family that makes $75,000 per year and compare that to one that makes $150,000.  Both families have two children, pay $500 per month as their share of health insurance costs, contribute 10% to their 401ks, and live in a state without income tax.  Let’s also assume that the $75,000 per year family has $4,000 in monthly expenses while the $150,000 per year family lives it up and spends $6,000 per month. 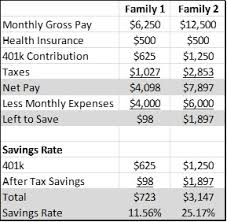 There are a couple of take-aways to this admittedly extreme example.  First, while high income does not automatically translate into high net worth, it sure helps.  Our simplified families demonstrate this as although the higher income family is spending 50% more, they are still able to save over 25% (pre-tax and post-tax savings combined) of their income, compared to 11.5% for the lower earning family.  Importantly, while our high income family spends more, they also didn’t go overboard on the spending.  If they had kept their expenses in line with the lower income family, the amount of savings would not be substantially higher.  Keeping up with the Joneses helps keep you in the poor house.

Second, the tax code is painful when it comes to earned income.  In our example, the effective tax rate for our higher earning family is 23% versus 16% for our low earning family.  Excluded from this example are any earnings from investments, which are taxed at a highly beneficial level.  Getting to a high net worth and income generated from your investments will both decrease your tax bill substantially.  Ultimately, a low tax expense is one of the secrets to maintaining wealth over generations

How do we become a high income earner?  Education is a key ingredient.  According to the Georgetown University study “Recovery: Job Growth and Education Requirements Through 2020,” 2/3rds of all jobs will require at least a bachelor’s degree or equivalent by 2020.  Finding the right industries and the right company will also improve your odds.  Starting a job 10 years ago at LinkedIn would probably have led to a pretty successful decade regardless of what job you were doing.  Contrast that with getting a job at JC Penney or any other big box retailer.  Not quite the same career trajectory.  Further, working for the revenue generating side of the business will help advance your career.  Many studies and news reports have discussed STEM jobs (science, technology, engineering, and math).  Great careers, to be sure.  However, compare a programmer at an investment management company with a programmer working for Google, Apple, or LinkedIn and you can see the difference in a revenue generating job and one that’s not.  In all likelihood, a programmer at a tech company will out-earn a programmer at a non-tech company.

Evelyn catches up to Matt by age 29 (only 6 years), and by the time they reach their peak earnings years in their 50s, Evelyn is earning almost $200,000 per year more than Matt.  Over these forty years, Evelyn earns $2 million more, a difference of 60% in lifetime earnings.  Who has the easier path to becoming wealthy?

The disparity between a great career and a mediocre career can be staggering.  Now let’s look at the right skills required, why being on the revenue generating side of the business is so important, how to build up your contacts and network, and how to find the right company and industry to work in.

Building the right skills early in your career will help build your reputation and boost your earnings potential.  The most valuable career skills to learn include:

Expense related jobs are often pretty easy to find.  These tend to be support jobs.  Human resource jobs, unless at a recruiting firm, are supporting jobs that will always be minimized.  Most IT jobs and accounting jobs are support jobs.  For example, according to Glassdoor, the national average income for a portfolio manager at an investment firm is over $100,000.  The national average income for an investment accountant at an investment firm: $44,000.  Sounds unfair, but remember that it is far easier to grow your way out of problems than it is to cut your way out of problems.  Revenue growth is more important than cutting expenses.

Regardless of your field, find the careers that help generate revenue, or you will be challenged to grow your income at an above average rate.

Introverts beware: Expanding your contact list and building your network will help you at your current job and if you ever want to make a change.  For example, before I moved to my current job, I had reached out to my boss years before.  Networking can be fairly simple, as he and I just got together for a beer a few times a year to talk shop.  When a team member left, I was his first call.  An initial meeting (with beers, naturally), a few emails back and forth, and then a second meeting (also with beers) where I signed my offer letter.  That’s it.  Because my boss already knew me, and knew what I could offer, he was able to move quickly.  It worked for him, since he didn’t have the recruiting expenses or the uncertainty around a new and unknown hire.  And it worked for me, as I knew him well, had a good idea of the type of boss he would be, and knew that I would fit well with the team.

Networking takes time, effort, and above all else, practice.  You have to get past your initial fear and be the one to reach out.  Keep in touch with your college classmates and use the alumni network to your advantage.  When you are young and starting out your career, it’s actually quite easy to reach out to some more successful alumni’s.  When you’re in your 20s, you are looking for advice.  When you’re in your 30s, it just looks like you’re looking for a job.  Industry conferences, associations, and even LinkedIn can be good places to meet new people.  Join the conversations online, but remember that the most important networking you can do is in person.

When you meet someone new that seems interesting, follow up with them fairly quickly.  Don’t let too much time lapse between the initial meeting and the second meeting.  It’s a bit like dating; you can’t be too anxious but you can’t wait too long either.  When you do meet, don’t try to sell yourself.  That’s not what networking is about.  Instead, try to learn about each other and find commonality.  If the other person discusses a problem they’re having and you can help, volunteer.  Pay it forward and help without regard to what you get.  These things pay off in time.

The Right Company in the Right Industry

The economy of the future will be driven primarily by a small subset of industries, and the growth in those industries will likely be generated by an even smaller subset of companies.  Try hard to find these companies.  If an industry is growing, most everyone involved will do well and you can ride the bandwagon.  The difference between a growing industry and a declining industry is huge.  Consider the difference between programming and hardware manufacturing.  A career in one will pay off much better than the other.

That being said, industry growth is not the end all be all.  Scalability is also important.  Don’t just focus on the number of jobs expected to be created in an industry; focus instead on the potential for earning power.  Home health care, pet care, and translation services are all expected to see large increases in the number of jobs available.  However, none of these is scalable, and without scalability, it’s tough to earn a big paycheck.  There are only so many hours in a day, and only so many pets that can be walked.

Once you find an industry you like, finding the right company becomes important.  Ask around and find companies that people in the industry envy.  These are likely the envy of the industry for a reason, and top performing companies tend to stay top performing.  Remember Pareto’s law and the 80/20 principle – most of the growth in the economy will come from a small number of industries and most of that growth within industries will come from a small number of companies.

For our purpose, smaller companies tend to be better, so long as they are growing quickly.  At a small company, you get access to the leaders of the company and its customers.  At a fast growing company, you’ll often see greater responsibility sooner than you otherwise would out of sheer necessity.  A growing company offers many paths to promotion and building up your resume of skills.  Once you find these companies, fight like heck to get a job there.  Your 20s are the time to take a risk, and if that means lower pay or switching to another company later, so be it.

The wealth generating capability arising from a great career in a growing company and industry is huge.  Potentially millions of dollars over a career huge!  Find the job on the revenue generating side of the business and work to be a high performer.  Build the skills early on in your career that will help set that foundation.  Don’t be afraid to take on extra responsibility.  Don’t be afraid to network.  And don’t be afraid to be ambitious.